Days until challenge ends 27.
Keep up the good work. You are 318 km from reaching Santiago de Compostela.
Percent done: 59%. Currently you average 7.3 km/day. At this pace you'll be done in 44 days on Thursday, 17 September.
You need to average 11.8 km/day to reach goal before Monday, 31 August.

Béatrice Karjalainen is 0.2 km behind. Prarthana Kaluarachchi is 4.6 km ahead. 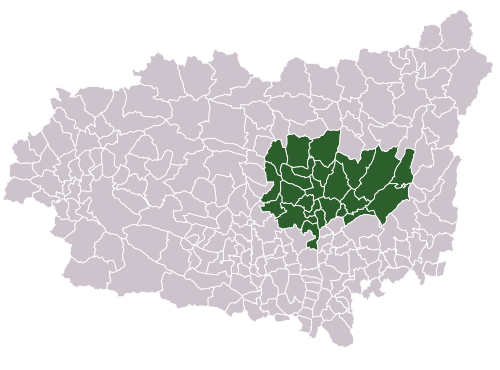 Tierra de León or Tierras de León (Tierras de Llión in the Leonese language) is a shire (comarca) in the province of León. The city of León, capital of the province, is the biggest city in the comarca.

Santovenia de la Valdoncina (Spanish pronunciation: [santoˈβenja ðe la βaldonˈθina]) is a municipality located in the province of León, Castile and León, Spain. According to the 2004 census (INE), the municipality has a population of 1,774 inhabitants.

Estadio Municipal Reino de León is a football stadium located in León, in the autonomous community of Castile and León, Spain. It is the home stadium of Cultural Leonesa (who currently play in the Segunda División B), with a capacity of 13,346 seats. == History == The stadium was inaugurated with a Segunda División B promotional play-off match between Cultural Leonesa vs Xerez CD, where the home team won 1–0, with Ibán Espadas who scored the first goal in the history of this stadium. It took place on May 20, 2001. 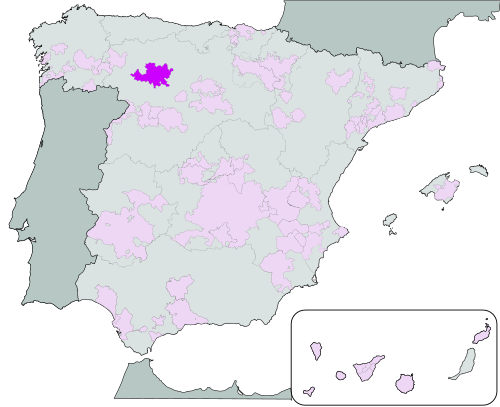 Tierra de Léon is a Spanish Denominación de Origen Protegida (DOP) for wines located in the south of the province of León, in Castile and León, Spain, and covers an area of 3,317 km2 at an altitude of approximately 900 m above sea level. The area attained its D.O. status on 27 July 2007. == History == Grape cultivation was probably introduced by the ancient Romans. The area benefited from being at the crossroads of two important routes: The Way of Saint James, the pilgrimage route running east to west from France to Santiago de Compostela, and the Ruta de la Plata, running north–south between the silver mines of the Cantabrian coast and the southern port of Cadiz. Around the 10th century, the main economic activities of the region were cereal production and milling, along with grape growing and winemaking, which was practiced in the monasteries of different religious orders.

Valverde de la Virgen is a municipality located in the province of León, Castile and León, Spain. According to the 2006 census (INE), the municipality has a population of 5,034 inhabitants.